Prishtinë, 28 dhjetor 2019: (24.12.2010 Opinion: Kosovo under Siege. By Prof. Dr. Agim ZOGAJ/ University of Prishtina) – (gm) While the Republic of Kosovo as an independent and democratic state is treading new paths in establishing the rule of law and a functional state, Serbian propaganda does not shun any means to deter and damage the processes of state building of its neighbour, Kosovo. In its refusal to recognise Kosovan independence, its territorial integrity and the sovereignty of the Republic of Kosovo, the neighbouring state, Serbia, uses all means at its disposal to interfere in the affairs and internal developments of our country. Serbia, exploiting institutional means, quite openly and without being impeded by anyone, is using the community of the Serbian minority, especially those in the northern part of Mitrovica, to obstruct the advancement of the Kosovan state. Serbia, in close cooperation with its historical friends and allies does not cease to use propaganda as a manipulative campaign tool in its political war against Kosovo for its own hegemonic purposes. The fabrication and and execution of political propaganda against the Albanian nation, not only against the state, but against our leadership and the former Kosovo Liberation Army, has always been part of Serbian tradition and is well known historically. As an illustration of Serbian tradition and the affinity of Serbian governments for fabricating anti-Albanian propaganda, we quote the ideologist of modern Serbian nationalism, the academic Dobrica Cosic, who writes: “The lie is a form of our patriotism and the testimony of our innate intelligence. We lie in a creative manner, with imagination and invention.” 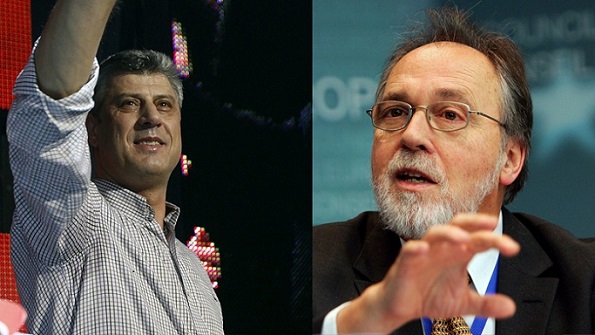 It is with reference to this Serbian academic that we should seek the roots of the deliberate propaganda and quite anti-Albanian bias of the Report compiled by Mr. Dick Marty, the Swiss parliamentarian in the Assembly of the Council of Europe. His report, accusing leaders of the former Kosovo Liberation Army of participation in the trafficking of human organs during the war in Kosovo (1998 – 1999) is essentially fabricated in accordance with the dictates of Serbian/slavic propaganda. The report, as indicated in the responses made not only by the Kosovo’s state institutions but Albania as a whole, is not based on facts, proofs or reality. The report is a desecration of the noble anti-colonial war of liberation of the Kosovo people and is utterly libelous. It is politically motivated and clearly biased towards Serbia and its allies – which always were and still are against Kosovo’s independence. Furthermore, we would say that the denigrating nature of the Report compiled by the parliamentarian Marty is a direct abuse of the authority of the Council of Europe, and as such does not reflect the spirit of impartiality normally conveyed by this Council.
We have to remind the European readers that in 2004 the International Court for War Crimes in former Yugoslavia, the only international legal body qualified and mandated to investigate crimes committed in former Yugoslavia, rejected Dick Marty’s claims that trafficking of human organs was carried out in Albania and Kosovo, qualifying them as fabrications, not based on proof, evidence or facts. Mr. Marty’s report alleges that the Albanian state, the Republic of Albania, was uncooperative. The truth of the matter is – as was also stated by the Ministry of Foreign Affairs of Albania – that such claims “are completely false, speculative and defamatory”. The institutions of the Republic of Albania have closely cooperated with the investigative group of the International Court for War Crimes in former Yugoslavia in 2004 and have offered their full cooperation to Mr. Marty during his visit to Albania in 2009. It was for this reason that Bernd Possel, member of the European People’s Party in the European Parliament, in his interview for the Deutsche Welle, said – speaking of Mr Marty – that, he is “a demagogue” and that he was being used simply for propaganda purposes. The Serbian propaganda machinery continues to fabricate and compile deceiving reports supported by certain services. Mr. Marty and his like have forgotten that it is easy to set up trials which follow the directives of certain political centres and which are fed by baseless opinion. A principle of any investigator’s methodology is always based on evidence, firsthand factual documents, and not on opinions resulting from political propaganda and speculation. It is understandable that the Albanian public without a prior awareness of Mr. Marti as an open opponent of the Kosovo’s independence could be surprised that it were possible for a member of the Council of Europe to produce such a defamatory report and fabricate events by the political masters. ¬¬¬Part of the political masters’ reason for the drafting of the libelous report is to turn the matter into a political issue at the Council of Europe at a future time of their choosing. One must ask why for example the report was not published before the free elections held on 12 December 2010 in Kosovo, but rather now – exactly at the time when even Belgrade admits that during the talks between Kosovo and Serbia they do not want to have the Kosovo delegation lead by Mr. Hashim Thaci as the next mandated Prime Minister. The false and scandalous claims of Mr Marty and his fellow thinkers regarding Kosovo and the whole Albanian people will continue to hang like a sword of Democles as long as the highest European and International justicial instances do not disprove with coherent arguments, evidence and proofs all the accusations, defamations, and tendentious fabrications contained in Marty’s report – which was approved by the Commission of Human Rights of the Parliamentary Assembly of the Council of Europe. In fact all the arguments and proofs are on Kosovo’s side because Serbia was the party who invaded and which has committed genocide against Kosovo people for the last 100 years. It was Serbia which had a criminal state structure during the Kosovan war, which continues to conceal crimes and war criminals and which continues to hide the bodies of murdered Albanians in its fields and the mountains. It is Serbia which is trying at all costs to destabilise Kosovo and destroy the independence of the youngest state in the world.
The truth is that the people of Kosovo, under the leadership of the Kosovo Liberation Army, conducted a war of liberation in order to gain freedom from Serbian rule, and was supported in this by the Northern Atlantic Alliance and the entire democratic world. During the war of liberation the Kosovo Liberation Army neither committed war crimes in any circumstances nor violated the sovereignty or territorial integrity of Serbia – thus demonstrating that it was fighting for freedom and had no intent to invade other nations or territories as Serbia did.