DR.AGIM ZOGAJ: KOSOVO FOLLOWING THE INTERNATIONAL COURT OF JUSTICE TRIUMPH OF THE WILL OF FREEDOM

Serbia Can Not Hide History
Advisory opinion of International Court of Justice on the legality of Kosovo’s declaration of independence paved the new way to the state of Kosovo, to expect new recognitions, to make decisive steps towards membership in the UN and not only that. In fact, the state of Kosovo, therefore, following the ICJ decision won full international legitimacy, because, exactly in the highest instance of a body of international law, as ICJ is, this mechanism of UN proved that, on the occasion of the founding act of the state of Kosovo (Republic of Kosovo) was not violated neither any principle, nor any standard of international law. Once more it was testified the triumph of freedom of the people of Kosovo, which, like other nations of the world was right to fight for freedom from Serbia. As a result of this universal right, the people of Kosovo, always on the principles of the right of peoples to self-determination of his fate, his freedom, his future, then, on February 17, 2008, established its own state on the land, in the Homeland of the forefathers. To the People of Kosovo, therefore, wasn’t enough only the freedom without a state, because, as it is known from history, without state there’s no freedom, no security, no future and prosperity for any nation. Realistically, ICJ advisory opinion, publicly slapped Serbia’s expansionist and colonial policy, whose state policy, historically and primarily in relation to Kosovo and the Albanian people was proved as enslavement policy of other people and conquering territories. Finally, the ICJ opinion (read: Decision) / on Kosovo, legally, on standards of international law knocked down the false Serbian myth of Kosovo as “the cradle of serbization” as “Serbian land” and so on. It was proved that, Serbia, militarily powerful, with its colonial policy of violence, the ongoing ethnic cleansing kept Kosovo occupied and since 1912 held the Albanian people enslaved. 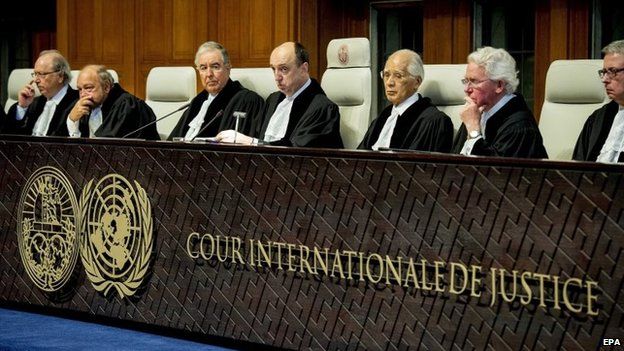 Serbia, the Serbian people, especially the Serbian leadership, ultimately and without any dilemma should be obvious that, upon establishment of the state of Kosovo, it does not have to do with any secessionism, separatism, disunion, parting or any violation of territorial integrity as Serbian leadership still continues to make propaganda and lie about it. The Serbian people should know better and more objectively its own history, and also they should know that, sometime in the distant history, in 1804, the first Serbian uprising with its leader, Karadjordje Petrovic had intended to implement the country’s unilateral secession from the Ottoman Empire. Serbia, as the country emerged from the Congress of Berlin (1878) always under the direct assistance of Russia and after the military defeat of the Ottoman Empire in the composition of its integral state, thus, within its territorial integrity had not been Kosovo, which was one of Four Albanian vilayets ruled by the Ottoman Empire. If the Serbian people have forgotten about it, even worse for them, now they are trying to conceal their own true history, and people that were enslaved until yesterday from Serbia now may remind them the truth about the history of conquests, colonies, ethnic cleansing and genocide. Serbia, as an independent state since 1878, emerged from maelstrom of enslaved people joined rapacious people, occupying during the Balkan wars from 1912 to 1913, initially Kosovo and then Macedonia. With those invasions, Serbia, the Serbian people, its leadership deprived the right of the Albanian people and other peoples to determine their own fate and their future. On those foundations, with rapacious policies all Serbian governments were raised since the establishment of the first unitary Yugoslavia in 1918, and the second AVNOJ’s Yugoslavia’s (1943) / and in particular Serbia’s policies were inspired by the arrival in power of Slobodan Milosevic. Serbian politicians and academics, and even the Serbian people should have known that the new Constitution of Serbia, in September 1990 has proclaimed “sovereignty, independence and territorial integrity of the Republic of Serbia”, a year before Croatia and Slovenia announced their independence from Yugoslavia. Today, alas, the Serbian state policy in relation to the Kosovo issue, thus even after IJC’s clear-cut advisory opinion, so according to this decision, delegates of the Assembly of Kosovo with the act of constitution of the state of Kosovo, neither have not breached international law, nor even the Resolution 1244, but Serbia still continues not to recognize it. Further, the leadership of Serbia led by president Tadic has launched, in the General Assembly of the UN, a new project resolution in order to challenge IJC advisory opinion. The new foretold Serbian resolution also seeks that UN General Assembly will make a decision in favor of the new start of talks between Kosovo and Serbia.
United Nation Security Council Resolution 1244 de facto is dead
Meanwhile, the EU, however, found itself in a very delicate situation and is making efforts to coordinate positions with official Belgrade to change the contents of project resolution which was already submitted to the UN by Serbia. EU, or its officials are insisting that Serbian leadership should recognize IJC’s opinion on Kosovo issue. A number of EU member states and official Washington already has made clear to Serbian officials that the IJC’s decision has ended question of the status of Kosovo, so they are suggesting to Belgrade for opening the talks with Kosovo state leaders on matters of mutual interest. But if, at this point, Serbia’s project resolution is not modificated and there won’t be reached any agreement then it is possible that in UN General Assembly another project resolution will be sponsored by Albania or any other member state of UN.
In the capital of the Republic of Kosovo, the official Pristina think that, as for a political perspective, UN Resolution 1244 de facto is dead, the first of all, since IJC advisory opinion has explicitly said: “This Kosovo’s act (Declaration of Independence – A. Z.) has not violated international law in general or in particular the resolution 1244.” The majority in Kosovo thinks that now time has come for a new resolution on Kosovo by the UN Security Council. The arguments are various, but the prevailing view is that, since IJC has considered the declaration of independence a legal act then Kosovo’s interim status, which was provided by Resolution 1244, is over and now a new resolution is needed for a new status. Therefore, it is estimated that the new status of Kosovo should issue a new resolution. ICJ opinion even though it is advisory and not binding, however, should become binding. However, the leadership of the state of Kosovo is harmonizing and coordinating positions with its Euro-Western allies. New resolutions with binding character can be issued and approved only by UN Security Council. In this particular case, even that it looks difficult to approve such a new resolution because the right of Russia’s and China’s veto, the new resolution must be approved by the votes of five members of the UN Security Council and it should contain the key recommendations under which the Assembly UN General would have to accept Kosovo in the of states. This procedure provides Article 4 of the UN Charter. In such a scenario, which is aimed by Kosovo and our Western allies, our friends, including countries of the Arab world, the General Assembly by a vote of two thirds of its members, will declare Kosovo UN member. The road to that decision, until the international declaration for the state of Kosovo is full of challenges, but given the historical, ethnic and international right is on side the people of Kosovo then the triumph of the will of freedom and self-determination for Kosovo will win in the General Assembly of UN.
Agim ZOGAJ/ PHD – University of Prishtina